A Blood-pumping Showdown of Art

Nothing beats the battles between parade teams in a traditional temple fair parade. The composer captured the spirit of such scenes in this drum number where three sections confront each other through rhythm and body language. The tension between them is depicted in a yin-yang contrast that breaks into a competition of drum skills done with Taiwan-style sportsmanship. 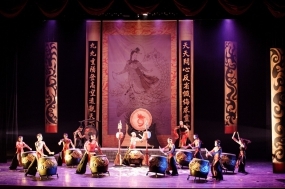