The Kuan-tsiòng Siú are the two defenders of Kṣitigarbha (the Earth Treasury bodhisattva, who watches for hell-beings). The two were originally nature spirits but, moved by the bodhisattva’s strong will, joined his cause as the leads of his officers, hence the name that means “Chief Infernal Officers”. In folklore, divine officers are too sacred for mortals to approach, as they hold the power to inspect good and evil deeds and arrest maleficent spirits. Such prohibition, however, does not exist in theatrical performances. This dance, originating from temple fair parades, is a solemn and mystical rendering of the traditional Kuan-tsiòng Siú ritual dance. The vivid colors and fierce expressions of the facial makeup bring the officers’ intimidating aura to life, while the dizzying formation changes of the five performers make for a culturally and visually rich presentation of the beauty of the Kuan-tsiòng Siú. 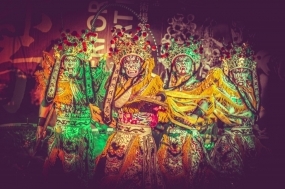